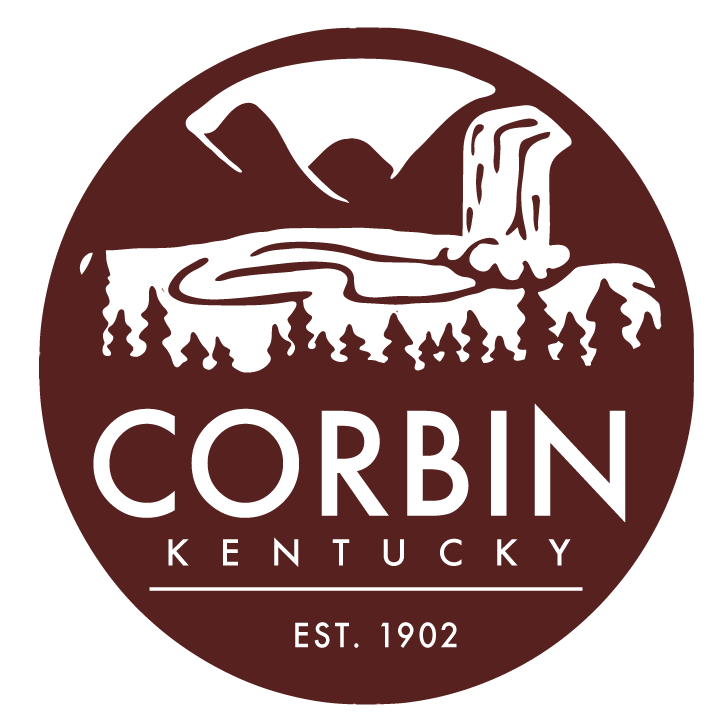 In 1895 a village on the banks of Lynn Camp Creek was incorporated and became the town of Corbin. Prior to incorporation, Corbin had been called Lynn Camp after William Lynn, a Virginian, who was lost in the area around 1800. After the Civil War, about six or eight farms were located between London and Williamsburg. Just north of where Corbin now stands, was a mill owned by the McHargues, and a post office, “Whip-poor-will”. There was a post office nearby in Woodbine, kept in the home of Liberty Sutton. A tavern was operated by Mrs. Rosa Graves at Rockholds, and there was another operated by H.C. Gillis. The Old Barton Mill on Laurel River, about five miles from Corbin was there during the Civil War.
Menu

The area of Corbin was sparsely settled and some of the earliest settlers, in the 1870’s consisted of the Nelson Cummins family and the John Moore family. Mrs. Moore, Armelda and Mrs. Cummins, Emaline were sisters and the daughters of George Y. Sears, a large landowner in the area. After the end of the Civil War, the railroad was built as far as Livingston, Kentucky. The tracks were extended to Corbin and Jellico in 1883.

The town which is now Corbin was originally named “Cummins” by James Eaton, the first postmaster, after his good friend Nelson Cummins. He received a letter from the U.S, Postal Department advising him to find another name for the town as there was already a post office by that name in Rockcastle County. Mr. Eaton named if after a minister, the Rev. James Corbin Floyd, who happened to be there at that time. This occurred in 1885.

Mr. Nelson Cummins can be called the “father” of Corbin, as he urged people to settle there. He bought 120 acres of land and sold it off in lots of one acre for $4.00 to $5.00 per acre, sometimes obtaining $10.00 per acre. The first lot was sold to S.J. Watts, who wanted to build a store on it. Mr. and Mrs. Cummins put of a dwelling house of four rooms and kept adding to it until they had a 26 room hotel. Mrs. Cummins operated the hotel and Mr. Cummins operated the tavern.

The first church in Corbin was the Congregational Church, which was located on what is now Center Street, but was moved to a location on 7th and Main Street, on land donated by John Moore. In 1886 the Louisville and Nashville Railroad extended its lines from Corbin to Pineville. It was at this time that they constructed a roundhouse and blacksmith shop, with other facilities, at Corbin. It was at last on its way to becoming a city.

The history of Corbin is intertwined with the expansion of the L&N Railroad. After the Civil War, the executives of the L&N Railroad decided to expand into the Cumberland Valley to gain access to the coal and iron ore of the region. The railroad reached Livingston, north of Corbin. The railroad bridges the Cumberland River to Williamsburg and reached Pineville by 1888. Middlesboro was added to the network in 1889. A connection was made with the Norfolk and Western Railroad to Shawnee, Tennessee in 1890.

While the tracks were being extended, improvements were being made to the facilities in Corbin. The L&N established a small railroad yard, roundhouse and engine house for equipment maintenance. Passengers traveling to points east and south from Louisville and Lexington changed trains at Corbin. J.F. Ashworth was named the first master mechanic at the yard and J.W. Logsden was the division superintendent in 1891. The railroad purchased additional land from E.Y. McKeehan to expand the roundhouse and to build a blacksmith’s shop. Both projects were completed in 1893.

The expansion of the railroad’s services spurred Corbin’s growth in 1892, and Congregationalist and Presbyterian churches were organized. David Chestnut began the first newspaper. Medical offices were opened in 1895 when Dr. Will and Dr. Jasper Bryant began their practice. The same year, Corbin incorporated as a town through a bill introduced in the state legislature by R. C. “Red” Browning.

Near the end of the nineteenth century, the L&N employed approximately 100 men at the Cumberland Valley division headquarters in Corbin. Corbin itself had two planning mills and two sawmills, a tin shop, a cabinet makers shop, a brickyard and twenty five stores selling groceries, dry goods and drugs.

The railroad yard and maintenance shop attracted boilermakers, blacksmith and machinists from other parts of the state. By 1900, Corbin’s population was 900. In 1902, the Corbin Banking Company was established. At the same time, two bridges were built across Lynn Camp Creek. One bridge was for pedestrians and was located near Master Street. The other structure was a wagon bridge on the Barbourville Road.

A YMCA was established to help alleviate the housing shortage caused by the influx of L&N workers. Many men stayed in boarding houses such as the Central Hotel.

The volatile mix of railroad workers with those from the timber industries earned Corbin a reputation for violence in the late nineteenth century, especially in an area of town known as “Saloon Row”. Both a deputy town marshall and a town marshall were shot during that period. The state guard was sent to Corbin twice by the governor to reestablish order. Another notorious area of town was known as “Hell’s Half Acre”, which was on the north bank of Lynn Camp Creek in Laurel County and out of the jurisdiction of municipal authorities.

Corbin was the site of what was considered the “Terrible Calamity”, where on the Evening of October 30th, 1919, an armed mob led by L&N brakeman “Pistol Pete” Rogers terrorized the town by rounding up between 200-300 African-American men, women, and children and forcibly removed them from town on rail cars headed for Knoxville, TN and Louisville, KY. In 1920, Joseph B. Snyder successfully tried and convicted Pete Rogers of confederating and he served two years in the state penitentiary for his crimes. This story serves as a testament to Corbin’s history of tragedy and it’s constant fight to re-affirm equality and justice for all citizens.

Around 1890 the L&N Railroad Co., having some knowledge of the vast wealth of coal and timber in that region, decided to build the Cumberland Valley Division and make Corbin the terminal. By 1906, there were 102 coal mines in operation within 25 miles of Corbin. The Wilton and Bertha mines alone employed 1500 men. During the same period, the L&N Railroad expanded into the heart of Southeastern coal country. From 1907 to 1911, tracks were laid up the Cumberland River Valley from Pineville to Loyall, Harlan and Benham. After 1911 the lines were laid up Poor Fork and Clover Branch to Lynch, High Point and other areas of rural Bell and Harlan Counties. Meanwhile the grade on the main line from Cincinnati was improved so that greater coal tonnages could be hauled along the roads.

In preparation for the expansion, the L&N started several projects in the Corbin railroad yard. A new roundhouse, machine shop, stationary boilers and dynamos were built. Pneumatic jacks were installed to facilitate the dropping of wheels for engine repair. The defense effort for World War I caused another expansion of the railroad yards and the construction of a new Locomotive shop. US Steel invested in the coal mines in Lynch and Henry Ford bought mines in Banner Fork by 1930.

THE EMERGENCE OF CSX

On October 14, 1980 President Jimmy Carter signed the Staggers Rail Act, which enabled railroads to compete without government regulation. Prices came down, traffic went up and the rail companies began to reverse decades of financial woe.
On November 1, 1980, the Chessie System and Seaboard Coast Line Industries, Inc. united and CSX Corporation was born.
In 1983, the foundation for today’s CSX continued to solidify. The Seaboard System Railroad, Inc., formed after the members of The Family Lines, SCL, L&N, CC&O and the Georgia Group (excluding the Western Railway of Alabama), formally merged on January 1.

In 1984, CSX grew beyond rail as it acquired control of a barge unit, American Commercial Lines Inc. That growth continued in 1986 when the ocean vessel company, Sealand, joined CSX Corporation. On July 1, 1986 the Seaboard System Railroad Inc. became CSX Transportation Inc. In 1997, the B&O merged completely into the C&O. On September 2 of that year the C&O officially adopted the CSX Transportation name.

In 2015, Corbin experienced a troubling time when CSX laid off 180+ employees from the railroad. This was due to the rapid decline in the coal industry. It truly highlighted Corbin’s dependence on the industry, and it put the town in a position to have to adapt. Luckily, the people of Corbin are resilient and we are now experiencing incredible growth in other industries that have come to replace what we lost. 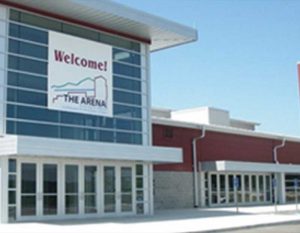 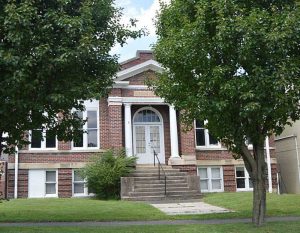 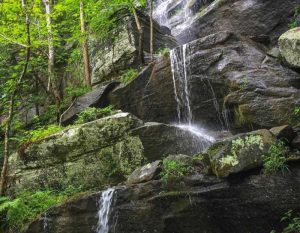 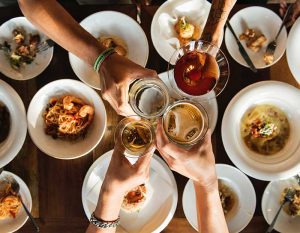 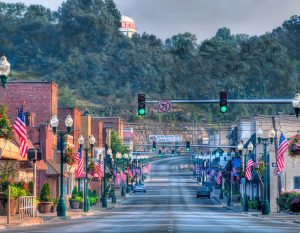 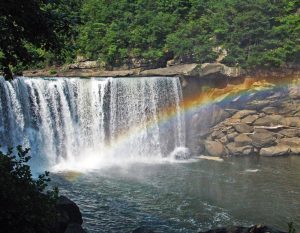 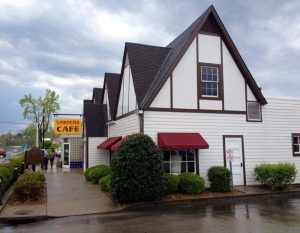 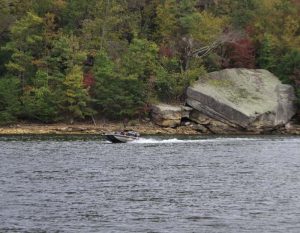 Located next to Lynn Camp Creek, is a lighted 1 mile walking trail, 3 resting areas with benches and water fountains. Engineer Street Bridge and Gazebo connect to the Creek Walk

We welcome you to Corbin and invite you to visit often to stay informed about our wonderful city–a city progressive in spirit, yet traditional at heart!

Part of Daniel Boone National Forest, Corbin, Kentucky is the home of Cumberland Falls State Resort Park in Corbin. The mist of the falls creates the only Moonbow in the Western Hemisphere and can be seen at certain times each month during clear weather. Called the “Niagara of the South”, this 125-foot curtain of water drops 60 feet, causing a mist on the boulders in the gorge below.

Cumberland Falls is a hiker’s paradise with 17 miles of hiking trails that wind through the park to scenic areas. The Moonbow Trail connects with many backpacking trails in the Daniel Boone National Forest.

Corbin is also the birthplace of the original Colonel Sanders Cafe and Museum. Listed in the National Register of Historic Places, the museum and dining room serve the traditional Kentucky Fried Chicken foods.

With more navigable miles of water than any other state in the union except Alaska, Kentucky has a veritable wonderland of lakes, creeks, ponds and rivers. With its cliff-lined shores and quiet coves, Laurel River Lake is a favorite destination for thousands of visitors each year. They come to boat, fish, swim, and relax at one of the deepest and cleanest lakes in Kentucky.

The Daniel Boone National Forest features over 600 miles of developed forest trails, including nearly 300 miles of National Recreation Trails. Some trails are easy and fun for families with small children; other paths make great half-day hikes. Trails can lead to a backpacking adventure for a night or much longer.

The Daniel Boone National Forest offers two types of camping opportunities: developed campgrounds and undeveloped or dispersed campsites located throughout the general forest area. These sites are within easy reach of many of the forests’ recreational opportunities.

Thank you for visiting and remember to visit often!

I-75 at Cumberland Gap Parkway